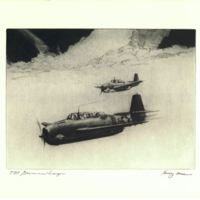 The Henry Maas lithographs of World War II aircraft are reproductions of Maas’s original dry-point etchings and are a part of a series of 30 plates made after 1945. These lithographs were collected and printed by the artist in 1976 under the series name, United States Air Power, 1939-1945. They depict various aircraft designed and used by the United States and her allies during World War II.

Born in Wisconsin on November 4, 1903, Maas moved to the San Francisco area in the 1920s. He was actively engaged as a free-lance artist from 1924 to WWII, creating general illustrative work for various advertising agencies and publications such as Standard Oil’s Bulletin. He specialized in aviation art. After WWII, Maas established a home studio working in other types of media: pencil, watercolor, and oils, with his primary focus still being aviation. He passed away on September 22, 1994.

Embry-Riddle Aeronautical University donated this collection to APUS in 2013.