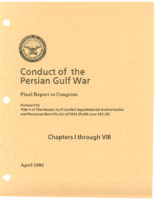 Conduct of the Persian Gulf War: Final Report to Congress

A report delivered to Congress that covers all aspects of the Gulf War offering details on the background of the Iraqi invasion of Kuwait, Desert Shield operations, and the offensive operations under Desert Storm.

I Am The American Soldier - U.S. Army Soldier Support Center

Demographic reports, data, and graphs showing a portrayal of the Army Active Duty and Reserve Components. The study provides a descriptive picture of the U.S. Army at the time of Desert Storm and Desert Shield. It serves as a source document for combat and training developers, material acquisition personnel, and other interested agencies and activities of the U.S. Army.

A historical report prepared by the United States Army Training and Doctrine Command (TRADOC) published by the Office of the Command Historian. The study provides documented summary accounts of training, doctrinal, and combat developments topics to provide ready reference information relating to TRADOC support during Desert Shield and Desert Storm.

Getting to the Desert Deployment and Selective Callup Lessons Desert Shield

A newsletter from the Center for Army Lessons Learned (CALL) that is focuses on observations and lessons gathered from CALL's collections concerning deployment of Active and Reserve Component forces. The newsletter covers aspects of deployment from notification to embarkation.

Winning in the Desert II

A newsletter produced by the Center for Army Lessons Learned that goes over topics associated with desert warfare and is intended for maneuver commanders. The newsletter is composed of two major sections, a listing by Battlefield Operating System of insights and training tips and a perspective on the identification of the Iraqi forces and how they fight.

Winning in the Desert

A newsletter produced by the Center for Army Lessons Learned that goes over topics associated with desert warfare and gives insight on desert operations for active and reserve units. It provides a solid basis for planning process and generates discussion to support decisions.

A handbook created by the U.S. Army Intelligence and Threat Analysis Center to act as a reference guide that provides basic information on organization charts, Iraqi military and equipment information, and other information related to Desert Storm.

The Trefry Archives is pleased to present a collection of reports, studies and other material related to the Gulf War of 1991, which saw a coalition of international forces headed by the United States enter into combat with Iraqi forces.

Prompted by the Iraqi invasion of Kuwait in August 1990, which brought about swift condemnation from then United States President, George H.W. Bush. The immediate aftermath of the invasion was America sending troops to Saudi Arabia as a "defensive mission" to protect Saudi Arabia from a potential further incursion by Iraq from Kuwait. This mission was named "Desert Shield."

The United States built a coalition force over the remaining months of 1990 to enforce a United Nations passed resolution that gave Iraq until January 15, 1991 to withdraw their forces from Kuwait.

When the day for pull out from Kuwait came and went without any action taken by Iraq, an offensive began against Iraq. The offensive phase of the Gulf War is known as Operation Desert Storm. The initial phases included a month long air offensive targeted at Iraqi strategic targets within Baghdad and in the field. Iraq responded by firing missiles against targets in Israel.

This collection includes material from both the Desert Shield and Desert Storm phases. In it you will find, the full Conduct of the Persian Gulf War, a report presented to Congress by the Department of the Defense that explores all aspects for the War. A number of newsletters created by the Center for Army Lessons Learned before and during the hostilities. An Order of Battle handbook issued during Desert Shield that provides background on Iraqi forces. You will find additional studies and reports in the collection.