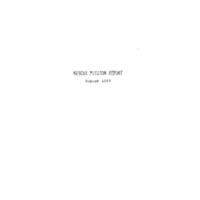 For America, the 20th Century saw a remarkable amount of military involvement from its reluctant entrance to the First World War on through to its part in the Kosovo War at the end of the century with many major wars and conflicts in the intervening years.

Thanks to the generous donation of long-serving APUS Board of Trustee member and retired Army LT GEN Richard G. Trefry's personal papers, we can better tell the story of this history. GEN Trefry's long service in the Army lasted from WWII until after 9/11, and his personal papers cover a wide breadth of the 20th Century.

The Trefry Archives are working to cull a number of specific collections that will help students and researchers to tell the history of America's military history of the 20th Century.